With the drive to deliver more homes across the country has come a loud call for those developments to be of a high standard of design in order to deliver high quality, liveable and sustainable environments for residents.  Research has consistently shown that high quality design makes new residential developments more acceptable to local communities and delivers huge value to all – socially, economically, environmentally and as regards long-term health outcomes.

Housing design audits were a tool developed and used by CABE in the mid-2000s as a systematic approach to assess the design quality of the external residential environment.  Over the summer of 2019 the Place Alliance conduced A Housing Design Audit for England, which evaluated the design of 142 large-scale housing-led development projects across England against seventeen design considerations.  The work was jointly funded by the CPRE and harnessed the support of a diverse alliance of organisations including: the Home Builders Federation, Civic Voice, Academy of Urbanism, Design Council, Urban Design Group, UK Green Building Council, and the Institute for Highways and Transportation.  It was underpinned by professional input from Arup, JTP, Spawforths and URBED and a network of specially trained volunteers across the country.

The audit elicited enough data for comparisons to be made regionally and against the results of previous housing design audits conducted over a decade ago.  It establishes a new baseline from which to measure progress on housing design quality in the future and to begin to ask some of the questions around why housing design in the volume housebuilding sector is like it is.  The intention was never to name and shame or to showcase the small number of already well known exemplars, but instead to rigorously demonstrate where we are as a country on the design of volume housing, and to identify what we are doing well and where there is room for improvement.

The background to the study and the approach used is included in Blog 64: Housing design quality, auditing England.  Here the focus is on the findings and the recommendations that flow from the analysis.

What are we delivering and where?

The audit showed that there has been a small overall improvement in housing design quality nationally since the last audits that were conducted between 2004 and 2007.  However, because this improvement is from a low base – what CABE at the time called “An uncompromising and unflattering picture” – the large majority of new housing developments are still ‘mediocre’ or ‘poor’.  Three quarters of the audited projects fell into these categories. 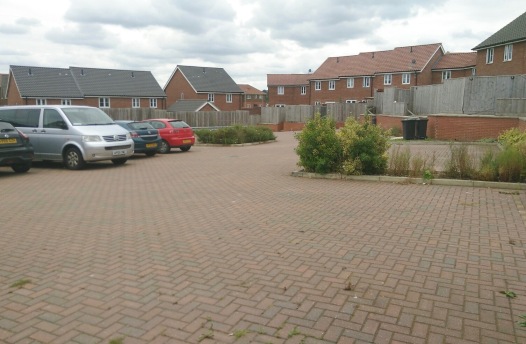 Three quarters of projects are ‘mediocre’ or ‘poor’

If advice in the National Planning Policy Framework was followed – that “Permission should be refused for development of poor design that fails to take the opportunities available for improving the character and quality of an area and the way it functions” – then one in five of the audited schemes should have been refused planning permission outright.  The design of many others should have been improved before relevant permissions were granted.

When examined regionally, the picture is patchy.  The most improved region was the West Midlands, with the South East and Greater London (the best performing region) also showing very significant improvements.  The East Midlands and South West scored least well, and significantly lower than the English average.  Positively, a wide distribution of ‘good’ and ‘poor’ scores across all regions shows that it is clearly possible to deliver high quality housing environments (and substandard ones) right across the country.  At the same time, if the improvements of the three best performing regions are stripped out of the findings, then the small national gain in housing design quality largely disappears.

The audit examined seventeen design considerations, and in two of these we seem to be doing well.  Designing for safety and security faired best, suggesting that the Secured by design parameters of recent decades (e.g. well overlooked street spaces) have been successfully mainstreamed across much of the country.  Schemes were also typically successful at integrating a variety of housing types, demonstrating that local needs, at least as regards a variety of house types and sizes and the integration of different tenures in a sensitive manner, are generally being successfully balanced with market imperatives.

Safety and security came out best in the audit

At the other extreme, it is no surprise that the least successful design elements nationally related to overly engineered highways infrastructure and the poor integration of storage, bins and car parking.  These problems have been leading to unattractive and unfriendly environments dominated by large areas of hard surfaces (tarmac or brick paviours), parked cars and bins.  Low-scoring schemes also performed especially poorly in the categories relating to the architectural response to the context and establishing a positive new character for development.  Development often had little distinguishing personality or ‘sense of place’, with public, open and play spaces poorly designed and located to encourage social interaction.  Housing units are frequently of an obviously standard type with little attempt to create something distinctive. 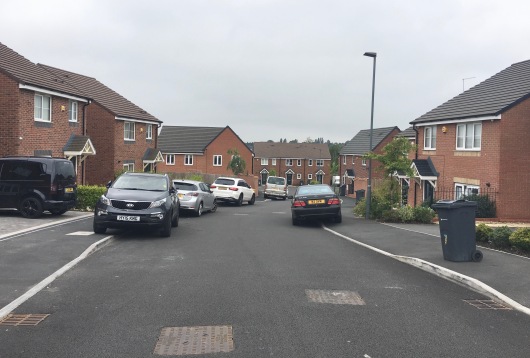 Some design considerations were marked by a broad variation in practice nationally.  These include how well streets are defined by houses and the designed landscape, and whether streets connect up together and with their surroundings.  Also whether developments are pedestrian, cycle and public transport friendly and conveniently served by local facilities and amenities.  The combination of many of these preceding factors influence how ‘walkable’ or car-dependent developments are likely to be.  Many developments are failing in this regard with likely negative health, social and environmental implications.

Finally, whilst the majority of schemes are achieving the basic minimum energy efficiency requirements set out in legislation, the audit identified that significant numbers are still falling short of even this minimum standard.  This, combined with the known and persistent performance gap between the ‘designed’ and ‘as built’ energy performance in new homes and the failure to deliver a green and bio-diverse landscape in many projects, amounts to a sub-standard response to the environmental challenges we face.

Why is there such variation in practice?

In sum, whilst some limited progress has been made in some regions, overwhelmingly the message is that the design of new housing environments in England are not good enough.  So why is this?  The research correlated the findings on design quality with a range of other factors in an attempt to understand.

When correlated with the nature of the site being developed it was clear that audited design outcomes were progressively worse as projects moved away from the urban core and reduced in density, and if they were built on greenfield, as opposed to brownfield, sites.  The additional constraints imposed by a stronger pre-existing urban context – often with existing infrastructure, heritage and natural assets, and a street network to plug into – seemed to encourage a more sensitive design response.  Generally we are not good at building at lower densities and on greenfields.

Where there is no established urban context, design is often poor

One notable finding is that better designed schemes achieve higher sales values and vice versa in every region, amounting to a 75% uplift nationally.  At the same time there is a continued trend (by a factor of ten) towards delivering sub-standard design outcomes for less affluent communities.  In other words, less-affluent communities get worse design.  Standard housebuilding development models undoubtedly make it easier to invest in better design when development values are higher.  But just because values are low, does not mean that good design cannot be afforded.  The cost factors separating ‘good’ from ‘poor’ design are likely to be a relatively small proportion of total development value (across all markets) and low value locations may anyway show a higher return on investment and be more profitable to develop because land values are low compared to the gross development value that can be achieved.  Indeed, a minority of schemes with low market value buck the trend and achieve ‘good’ and ‘very good’ design outcomes whilst high value schemes sometimes deliver only ‘mediocre’ or ‘poor’ design results.  Better design can be afforded, but we just don’t do it. 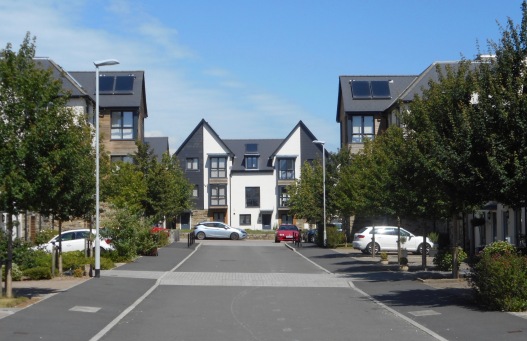 Some developments in low value areas are achieving good design

When the design practices of our largest developers were examined, it was also apparent that individual developers often had widely varying audit scores, sometimes right across the audit scale from ‘very good’ to ‘very poor’ design.  The practices, priorities and inconsistencies within and between housebuilders are clearly very significant as regards the quality of housing developments that are being realized.

The practices of local authorities are also very inconsistent, notably around the use of proactive site-specific design governance.  The audit confirmed that to achieve ‘good’ or ‘very good’ outcomes requires more than a passive check against a generic checklist of design principles, it requires a proactive and site-specific process of guidance and accompanying peer review.  The most effective design governance tools were therefore shown to be design codes and design review, although these tools are used far less than other more generic policies and principles.

A series of more detailed case studies accompanying the audit demonstrated a repeated story that, in order to meet housing numbers, poor design is either getting through on appeal or at the stage of reserved matters when design is being repeatedly dumbed down.  This fatally undermines the Government’s own policy on design in the NPPF and sends a message that design quality does not really matter.

Design quality is often dumbed down during the development process

A final element of the audit involved asking residents what they thought about the environments that they now lived in.  This was compared with the views expressed in the Place Alliance’s recent England-wide survey of Councillor’s attitudes towards residential design.  Whilst new residents are generally happy with the environments around their new homes, this contrasts strongly with the perspective of local councillors whose views can be taken as a surrogate for those of the wider community.  They regret what they see as the imposition of poor design and the loss of local character in their areas.  Both residents and councillors see a negative impact from unduly car and roads dominated environments, but the lack of choice (to choose good design) in many areas and the emotional investment made in a new home, may go some way to explain the divergence in views between these two groups.

What can we do?

What was clear from the research was that the responsibility for poor housing design is a shared concern, across housebuilders, local planning and highways authorities, and Government.  Based on the findings A Housing Design Audit for England makes recommendations for each.

For some housebuilders, as long as there is a ready market for poor quality design, and they can continue to get this product through the planning system, there is little incentive to improve.  For some planning authorities, the short-term imperative to deliver new homes may continue to trump the long-term negative impact of the environments that are being built.  For some highways authorities, the very notion of good place-making is, as yet, simply not on the radar.  Collectively, as the results of the audit show, we need to significantly raise our game if we are to create the sorts of places that future generations will feel proud to call home.