I recently revisited two high profile new housing developments and was struck by the very different approaches adopted to their design; this despite, on the face of it, very great similarities in their development.  The first, New Islington in East Manchester, is being built out by Urban Splash to a Masterplan by Will Allsop.  The second, Kidbrooke Village in South east London, is being developed by Berkeley Homes to a Masterplan by Lifschutz Davidson Sandilands.

Both schemes began in the heat of New Labour with the promise of transforming extremely challenging socio-economic contexts through the eradication of failed social housing estates and their replacement with entirely new urban neighbourhoods.  Both schemes are dominated by a single developer and represent a scale of ambition and long-term commitment that is admirable.  Both mark a considerable investment by the public sector, some of which is explicit, through the auspices of various public funds, and some less so, such as the costs (in more than one sense) of dispersing and rehousing many former residents.  Equally, both rely on establishing a new market, where none existed before, and on attracting pioneering new (and wealthy) purchasers to live alongside a reduced, although still significant, constituent of social housing tenants.  To achieve this both also feature extensive areas of open / water space, a wide range of public / community facilities (including new schools), and a proposed mix of uses from employment, to leisure to retail uses.  The intention is that real bits of the city, rather than monotonous suburban mono-culture are delivered.

On the face of it therefore much unites the two schemes.  So how do they differ?  Most obviously they are two hundred miles apart where every mile represents a £1,500+ uplift in average house prices.  This of course makes a critical difference to every aspect of the development equation, although not, so far, to the broad housing types.  I say “so far” because Kidbooke will soon go supercharged with the addition of a new 25 storey tower and other blocks of up to 15 stories making up the later phases of the scheme and ensuring that it delivers 4,800 new homes overall, a 60% uplift on those that were demolished.  Currently, however, both schemes are dominated by a mix of low and medium rise development: three storey terraces to nine storey apartment blocks in Kidbooke Village, and two storey semis and terraces to nine storey apartment blocks in New Islington.

A further difference (and similarity) is the geographic focus of the two developers, each of whom are primarily associated with particular home markets – respectively in and around London, in the case of Berkeley Homes, and Manchester and the Northern core cities, for Urban Splash.  This means they both know their local markets intimately, and what stacks up where and when and with what subsidies, and have been able to develop and refine their own particular brands and philosophies of building with that in mind.  Ultimately this leads to quite different outcomes on the ground.

Urban Splash, for example, have long been supporters of contemporary design, seeing it as an integral part of establishing a distinct and marketable image for their schemes that often tackle ‘difficult’ environments or involve challenging historic buildings.  For them, design adds a premium and helps to forge a new place identity to schemes.  It also gives Urban Splash a particular position in the market that has served them well, and enabled them (usually with great success) to tackle projects that for other developers would have quickly placed in the ‘too difficult to handle’ category.

At New Islington, the commissioning of ‘starchitect’ Will Alsop with his reputation for breaking all the ‘urbanistic rules’ was a key part of this strategy, and helped from day one, along with the name change – Cardroom estate to New Islington (very New labour) – to begin to challenge perceptions and attract the young pioneering types that were required to make the project work.  In this respect, what is emerging is exactly what was promised, an assortment of weird and wonderful brightly coloured shapes that reminded me of my daughter’s toys (she is two) scattered on the living room floor.  These, like much object architecture, are extremely photogenic when looked at in isolation, but, looked at holistically, may struggle to gel together.  Each is its own separate thing on its own plot and it is not at all clear that the planned public realm will be strong enough or coherent enough to meld them together into a real place.  So, although, within their plots, there is a certain theme or coherence, between the plots the danger is discord; no doubt quite deliberately!

Whilst it is difficult to determine exactly how the whole will come together (or not), one can’t help feeling that many of the parts are trying a little too hard to be different.  The Chips development, for example, whilst a dramatic statement of intent for the project as a whole, resembles up close a seemingly impenetrable wall of development that repels rather than attracts users to the building.  The Guts development, not far away, tries to reinvent the ‘back to back’ by building semis, back to back instead of side to side.  In turn this opens up a private garden space between each pair across the width of the plot.  Whilst in principle a clever idea, the result is a series of spaces that seem dark and unattractive and, because they open onto the street at each end, lack privacy.  Residents have installed a range of unattractive screens to overcome the problem.  Other houses in the group have their back gardens fronting directly onto the street with attendant security and aesthetic problems.  The approach echoes the low rise housing from the Cardroom Estate that it replaces, leaving one to ask, what have we learned.  Finally we get to the Islington Square development with, what one commentator described as their “oversized cartoonish Dutch gables and loud argyle brickwork”.  Here, unlike The Guts, small front yards are locked behind large less than welcoming gates, whilst the side street returns to each block are fronted by long continuous blank walls.  Only the fun of the front facades acts to overcome the overwhelming feeling of defensiveness.

Of course it is easy to be critical, and The Guts and Islington Square represent brave attempts to define new typologies of social housing to rehouse residents from the housing they replaced, the eventual aim being to develop 1,700 homes on the site, across tenures.  That said, the overriding impression, so far, is of a development focussed very much on the houses as bits of architecture, rather than on the place that New Islington is trying to become.  Of course it is early days yet and a coherent public realm may yet emerge.

Turning to its comparator, Kidbrooke Village is built by Berkeley homes, one of the UK’s top five volume housebuildrers by output, and a company that (alongside Barratts) has seen a gradual acceptance and embrace through the noughties of core messaging from CABE and others that design matters.  At Kidbrooke, for example, the public realm seems to have led the development, with each phase of the scheme embedded in a coherent network of traditional street spaces or looking onto and over the extensive parkland that runs through the centre of the scheme and that gives it a strongly green character.  The greenery extends into the housing areas through a series of ‘green fingers and ‘green rooms’ (in the Berkeley’s own words).

The architecture, whilst clearly contemporary, is restrained and respectful, fitting into what some have christened the new London vernacular. At Kidbrooke, so far, this has consisted of two basic types: three story terraces of town houses that clearly build on a very strong London tradition, and apartment blocks that are consistent enough to gel together whilst also varying throughout the masterplanned area in order to define a set of neighbourhoods with their own character. 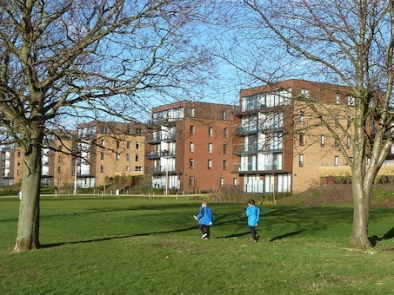 Another interesting dimension of the project is the emphasis on social sustainability, reflection an intention that, when complete, the village should offer the full range of local facilities and amenities that would be present in a traditional London suburb, including places to meet and interact, shopping, sports, health and educational facilities and a clear local centre.  The scheme does not feature much in the way of environmental technology, although the emphasis on ecology and water is key, as is the strategy of building on only 35% of the land; the latter in order to maximise the green parkland.  Finally, the aspiration is to build 1,700 affordable homes (a mix of for rent and shared ownership), although the social impact of this, arguably, needs to be offset against the extreme costs of the housing for sale.  Today, these start at half a million pounds for a two bedroom flat and rise beyond a million (the very opposite of affordable!).

Like New Islington, the redevelopment of Kidbrooke still has someway to go, and it is too early to say whether it will meet its clearly very laudable aims of creating a socially sustainable place.  Like New Islington also, the development is exploring new ways of doing things, and this has involved building at significantly higher densities than London’s traditional suburbs, at least 40 dwellings per hectare if you include the park and 130 if you don’t (compared to, for example, 10-20 at Hampstead Garden Village).  Whilst things may change when the newly approved and much higher blocks come on stream, as things stand the impression is of a development that will very quickly settle down to become just another part of suburban London, distinct but well integrated, and at the same time human and very liveable.

So which do I prefer?  Well, as an architect, I find the allure of the New Islington architecture quite intoxicating.  There is always a thrill associated with such inventiveness, even craziness, and with exploring the possibilities of doing something different.  But if I put myself in the shoes of someone who actually has to live there, I suspect that sense of wonder would quickly wear thin.  Of course, as more of the scheme is built out, including the planned spaces in between the blocks, a strong and positive sense of place may begin to emerge; I hope so.  As things stand however, whacky houses as a substitute for quality places does not seem enough.

Turning to Kidbrooke Village, whilst it lacks the excitement and drama of New Islington, one feels that a real place is nevertheless emerging and that care and attention has been paid to considering all the overlapping depths and complexity (far beyond the houses themselves) that makes that possible.  Moreover, by rejecting fad and whimsy, the designers of Kidbrooke have ensured that it should date well, and this is clearly an important consideration when one is building for the long-term rather than for what is trendy this year or next.  Perhaps the ultimate test for any of us should be, would we like to live there?  Whilst, 10 years ago, Kidbrooke was a place that I (like most) would have gone out of my way to avoid, today it is somewhere that I could very well imagine living with my family; it is difficult to say the same about New Islington.  Just one problem: housing a family of five on an academic’s salary in Kidbrooke Village!  I had better think again.