Not the whole story

The tale of London’s Docklands from the 1970s to the property crash of the early 1990s is a tale told and retold many times.  Despite this, surprisingly little has been written about the area since, and how it faired in the New Labour era.

This article brings the story of the Isle of Dogs up to date.  It derives from a detailed review of the 12 key plans that have sought to guide change over the 35 years and four development waves of the area’s regeneration.  Given the lack of space, only a very potted history and assessment is given here[1].

To help interpret the diversity of planning models utilised in this one small part of London, each development wave is viewed through a framework constituting two separate but related continua, from Market-led to State-led, and Plan-based to Opportunity-based modes of planning. 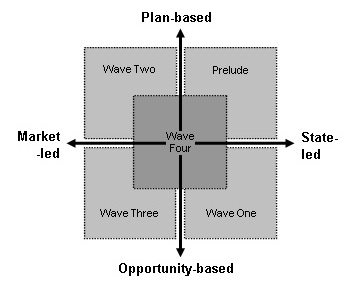 Serious attempts at regenerating Docklands began in 1971 when the Conservative government commissioned private consultants to develop options for the then largely redundant post-industrial landscape.  Reacting strongly to what was seen as an attempt to impose national and private sector solutions on local and public problems (a foretaste of what was to come), the subsequent Labour administration placed control in the hands of a public / community partnership – the Docklands Joint Committee (DJC).

Despite the successful completion of the London Docklands Strategic Plan in 1976 (the only pan-Docklands plan ever to be formally adopted), the period was marked by inaction and failure, with the general economic climate restricting both public sector funds and private sector interest.  The latter was also limited by the plan’s innate opposition to private investment and support (almost exclusively) for new public housing and industrial regeneration.

The failure of the DJC was in part a failure to understand that the times were changing, and that local government would no longer have the same powerful role (or resources) that it had in the past.  Using the analytical framework described above, the period can be classified as plan-based and state-led.

From 1981-1985, a dogmatic preference for public sector solutions gave way to a dogmatic preference for private ones, spearheaded by the designation of the Enterprise Zone on the Isle of Dogs and the establishment of the LDDC to take control of the wider Docklands regeneration.  This first wave of actual development was characterised by a design and development free-for-all, with the LDDC largely unaware of the area’s potential and almost entirely devoid of any serious vision beyond ‘anything goes’.

The only attempt to impose some sort of order came through the commissioning of the townscape inspired Isle of Dogs Development and Design Guide from (amongst others) Gordon Cullen.  The result was quickly dismissed as “preposterously aesthetic”, whilst the whole exercise was undermined by the absence of any real belief in the plan, which, as a result, was largely sidelined.

Nevertheless the state (in the guise of the LDDC) was active, utilizing marketing guides, hype, direct public realm investment, and fiscal incentives to drive the development agenda.  The period can therefore be characterised as state-led but opportunity-based whilst on the ground the results were fragmentedly suburban and roundly criticised as “an architectural zoo”. 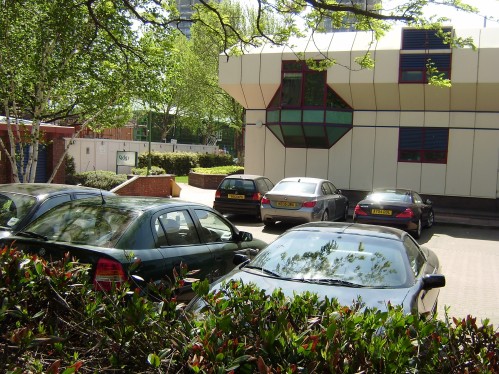 With the arrival of Canary Wharf (10 million sq ft of commercial offices and ancillary uses) everything changed.  Design was seen for the first time not as a barrier to innovation and a cost on investment, but as a means to establish a marketable sense of place.  The urban yet starkly private vision that resulted was fixed within a detailed masterplan and series of design codes designed to contrast dramatically with the surroundings – economically, physically and socially.

Yet the area remained marginal, not least because of its almost non-existent public transport infrastructure.  History shows how Olympia and York over-stretched themselves and when faced with a major economic downturn, were unable to let enough space to service their spiralling debts.  In 1992 they went under.

If the scheme marked a continuation of the lack of interest the LDDC had shown for social and community concerns, it demonstrated the importance of the certainly (up to a point) that goes hand in hand with a robust plan.  Finding no such plan in place, the market sought to create one.  The period can therefore be characterised as plan-based, market-led; a new and important departure for the UK development industry.

At this time the public sector stepped in with increasingly large dollops of cash to belatedly put in place the necessary infrastructure to give the area a viable long-term future.  This had been envisaged as far back as the various 1970s plans, but in the early 1990s was still largely absent.  The extension of the Docklands Light Railway to Bank and later the building of the Jubilee Line extension (opened in 1999) were truly catalytic for the area and it was this as much as the recovering fortunes of the markets that led from the mid-1990s onwards to the gradual re-emergence of Canary Wharf under new owners, Canary Wharf Group. 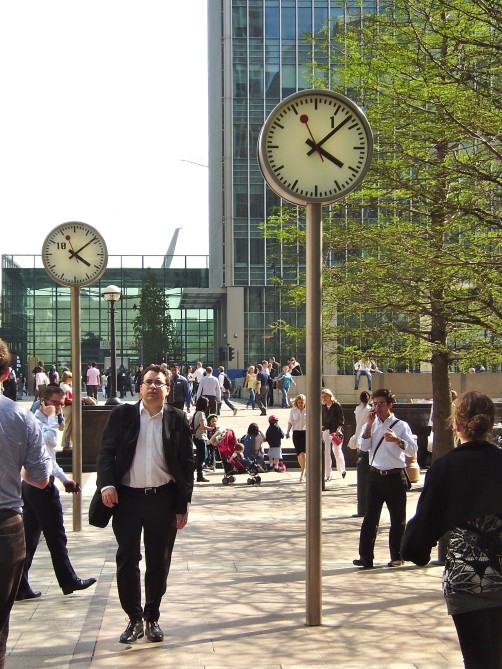 Critics who had rashly written off the Isle of Dogs were proven incorrect as the original masterplan (with some revision) was completed alongside a second phase on Heron Quays.  During this period both the urban design and the architecture matured, the former becoming less introverted and formal and the latter more international and corporate.  The combined impact was that a real place began to emerge, albeit still largely disconnected from its immediate hinterland.  But although the LDDC began to apply the design-led lessons from Canary Wharf to other parts of the Docklands, they continued to pursue a hands-off marketing-led strategy in the remainder of the Isle of Dogs, with sites marketed as isolated enclave development opportunities.

By 1998 when the LDDC was wound up the regeneration had delivered 849 hectares of developable land, 75,485 jobs, 24,300 new homes, including 6,000 for social housing with a further 8,000 council units refurbished.  £8.7 billion of private investment had been levered in by £2 billion from the LDDC and £2 billion in transport infrastructure.  But research commissioned by the Isle of Dogs Community Foundation (IDCF) concluded that the Island remained an island of two halves, with advantage, wealth, and great liveability sitting side by side with exclusion, alienation and squalor.  Despite this, when the London Borough of Town Hamlets (LBTH) took over from the LDDC, initially they continued the same incrementalist approach to development.

The Island remains divided, how the other half live

The third wave can be categorised as a market-led process guided by opportunity rather than effective plan-making.  Thus the Canary Wharf masterplan was rapidly re-caste in the light of the new market context, whilst LBTH’s 1998 adopted plan represented little more than a borough-wide development control manual.

The fourth wave saw urban renaissance ideas begin to influence the area through the auspices of the new London Plan where intensification and the pursuit of better design were significant themes.  The permissive approach to commercial and residential development that this ushered in, alongside sustained economic growth from the mid-1990s onwards, marked a period of major development proposals spreading beyond the confines of the Canary Wharf estate, to areas in the centre of the Island (the Millennium Quarter).  In time these developments look set to gradually sweep away the Wave One suburban business park developments concentrated there.

A sequence of plans from LBTH latterly attempted to give some structure to both this area and to the Island as a whole.  These included the Millennium Quarter Masterplan that has been partially successful in the former.  However, the Isle of Dogs Area Action Plan looks likely to fail in the latter, having been thrown out by the Government Office for London alongside the LDF Core Strategy for lacking any meaningful spatial vision.

Yet this has been a period of huge development on the Island, during which a better mix of uses has been achieved as high-rise residential mega-schemes appear in the Millennium Quarter.  Permissions for these and equally massive commercial developments in and around Canary Wharf are being delivered with major planning gain packages attached.  Through the auspices of the IDCF, these are supplementing further direct public sector funding (e.g. £3.1 million SRB funding) to deliver a range of social regeneration benefits.

With a huge pipeline of projects on the horizon, the potential to overcome the still obvious physical fragmentation of the Island is also finally here; although with the danger of perpetuating a network of private or pseudo-private landscapes.  The period nevertheless demonstrates (perhaps for the first time) a pragmatic planning that is balancing state and market agendas, informed by plan and opportunity combined.

Too soon to judge

In essence this has been a regeneration story born of private initiative and public subsidy that once established has only gradually incorporated a more proactive, if as yet still hesitant, public sector contribution to planning its future.  Thus the multiple public sector plans that have been produced over the period have largely been ineffective as means to establish a clear vision, and have only become effective when the lessons of the private sector alternative have been learnt.  These are, that in England today, for planning to succeed requires a clear physical vision (to guide economic and social objectives), sustained commitment to its delivery, and (still) private sector buy-in and thereby resources.

We may yet end up with a well-shaped and cohesive part of the city that has a part to play beyond the very obvious economic role that it currently performs.  The high cost of office space in London (the highest in the world), the massive planned expansions still on site or on the drawing board (despite the recession), and the new determination of the public sector to shape this development in a more positive manner than in the immediate past, all bodes well.

But planning of this type needs one more thing to succeed; a buoyant economy.  Therefore, in a more uncertain global economic climate, one in which commentators such as George Soros have persuasively argued that the super-boom of the last 60 years is at an end, all future plans are in doubt.  In regeneration of this scale, 35 years is just too soon to judge. 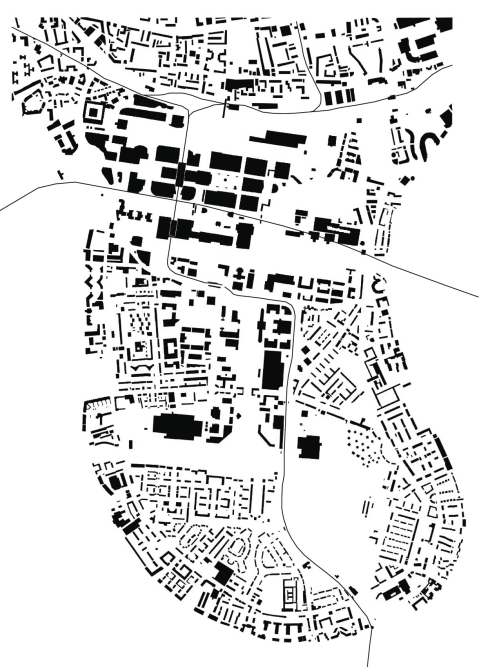