I was recently invited to join the judging panel of the Nottingham Evening Post Commercial Property Awards.  Judging design awards of this nature is always rewarding as it forces you to rationalise and then articulate to your fellow judges why one scheme is better than another.  Inevitably, however, you also find yourself trying to compare apples with oranges: a small infill building versus a new public square; an out of town office park versus an historic conversion project.

In this case, the invitation was particularly attractive as it related to the City of Nottingham, a city in which I spent over ten years of my life, first studying and later lecturing.  The latter period finished in 1998 and since then I have rarely visited.

Returning to a city that you once knew but have not visited for sometime is always interesting, giving a slight feeling of time travel.  To me it is amazing how fast our urban areas change and how unfamiliar they can quickly become.  In the case of Nottingham, since leaving the city a decade ago, it has secured a new tram system, re-built it’s major public space – Market, or Slab, Square (the nick name even more apposite following its re-design) – been subject to a building boom, over-run by a new café culture, and has shifted decisively from a bi-polar shopping focus to a uni-polar one focused around the huge and introspective Victoria Shopping Centre.

Overall, what has been achieved (apart from the final item in my list) is impressive, and the transformation continues.  This dynamism was clearly apparent in the range of schemes we were given to judge, two of which, strangely enough, were for sites that during my period lecturing in Nottingham, had been staple projects for our students in their urban design classes.  One in particular – the Lace market Square – I was particularly delighted to see on the awards shortlist, having critiqued what must run into hundreds of student proposals for the site.

The proposal itself for a new square in Nottingham’s historic Lace Market has a long history, but has had to wait for the right economic climate and demand to prevail before it could be realized.  In this case the demand was for city centre living (rather than offices, the subject of previous schemes), underscoring the genuine renaissance that the city centre has seen in its recent transformations.  The scheme features an architecturally restrained and contextual series of buildings designed by local architects, Franklin Ellis, to reflect the red brick industrial heritage of the area.  These surround a clearly contemporary public space designed by landscape architect and artist Fiona Heron. 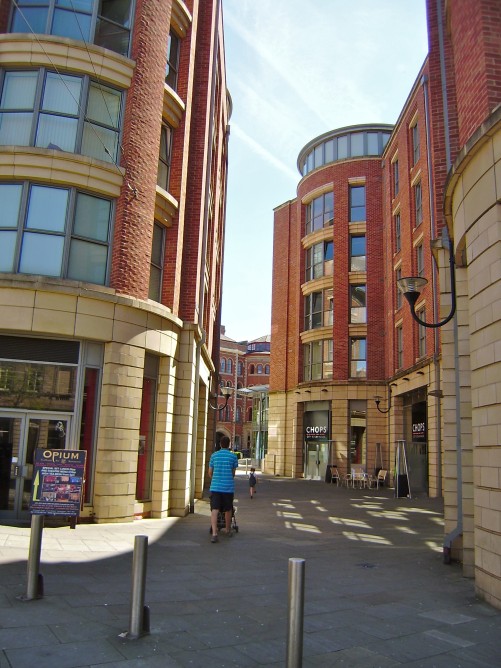 To me, the scheme merited the main award at our disposal, reflecting both the trials and tribulations that the architects and planners had gone through over the years to deliver a workable scheme, but also the lasting public value that the new square would offer to the city and its inhabitants, in perpetuity.  My fellow judges were less convinced and two interesting apples versus oranges debates emerged, each underlining the gulf that still exists between the priorities of the different built environment professions.

The first concerned the relative merits of out of town business park office space versus developments in more constrained historic urban settings, such as the Lace Market.  To some on the panel, the urban schemes were inevitably compromised by their settings, whereas the Class A office accommodation that could be provided outside the city centre was functionally superior (in their view) and therefore merited a design award.  From my perspective, these schemes amounted to little more than decorated boxes in unsustainable locations surrounded by parking.  As such they offered little public benefit, no matter how efficient their internal layouts.  In this respect they paled into insignificance when compared to the architecturally and urbanistically more challenging urban schemes.

The second debate might be crudely described as an architecture (apples) versus urban design (oranges) debate relating to the relative merits of ‘background’ versus ‘landmark’ architecture.  In the case of the Lace Market Square, for example, few would describe the buildings as architectural masterpieces; they are not designed to be so.  Instead they are designed to be something that we no longer train architects to produce, well mannered background buildings whose role is not to shout out from the crowd for attention, but instead (in this case) to define, funnel people into, and set-off the public square.  The square then becomes the focus of the composition, correctly reflecting its public role and function.   In this case, the square and the buildings also provided the stage for the carefully crafted artwork of Heron.

Against the scheme was a landmark architectural composition for a new hotel and retail complex (‘The Pod’ – immediately across the street from the Lace Market Square development).  There, an undeniably contemporary building had been designed that contrasts strongly with the surrounding building forms and vernacular, and which, in doing so, proclaimed its own importance as a piece of landmark architecture, and, conjointly, as a piece of private real estate.

This was a story of two halves.   As an architect I found myself admiring the qualities of the top half of the building as a sculptural form and as an interesting contribution to the city skyline – wrapped up in a determination to contrast, as far as possible, with the context and thereby to establish a new landmark.  As an urban designer, however, I remained concerned with the failure of its designers to consider the bottom half of the building in terms of its contribution to the public realm.  Thus at street level the building line was formed by the ubiquitous curtain walling that characterises so many contemporary retail schemes, and which (as here) can all to easily result in an impoverished streetscene.  This contrasted strongly with the magnanimous (if a little too safe) approach adopted by its neighbour.

The Pod – the top half 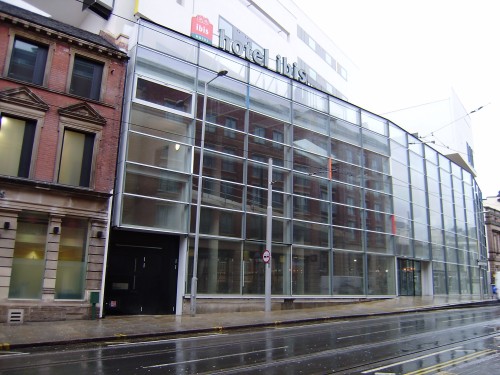 The Pod – the bottom half

For me, commercial developers who are prepared to give something back to the city in the form of a well designed public realm, be that public space or simply a well articulated and active frontage, should be congratulated.  In my mind such schemes will always be superior to those that do not, no matter what their merits as pieces of art.  In this case, I was out-voted and the architecture triumphed over the urban design (and thankfully both triumphed over the decorated box). Having served on a few such juries, I suspect that few would have found differently.  The apples have it again; more’s the shame!