In the words of the immortal Talking Heads song (that dates me!):

We’re on the road to nowhere

Taking the road to nowhere

The latest road to nowhere is a 50-meter stretch of bright green tarmac, wide enough for two cars to pass (well almost) that dominates the first new waterfront space in Maritime Greenwich since the Cutty Sark was given pride of place next to the Thames.  The ride on the other hand is a cycle ride along this new highway (or should I say cycle track) that really does go nowhere! 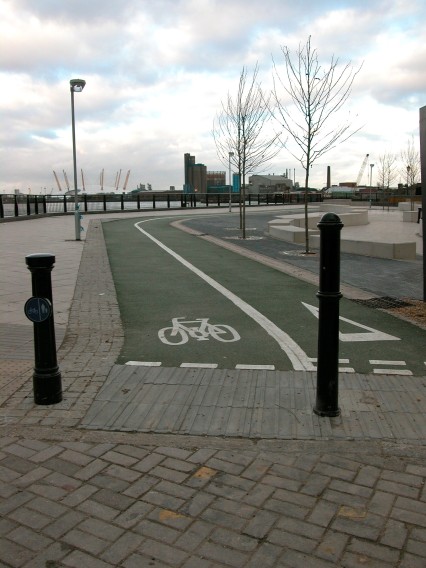 The road to nowhere, from the west

One might ask, what sort of rulebook is it that demands:

What we forget is that the best spaces are usually well able to cater for a diverse range of overlapping uses, users and modes of transport without the need to parcel them up and separate them in a manner so beloved by our highway authorities.

The issue puts me in mind of a conversation I recently had with an eminent and recently retired urban designer who tongue-in-cheek (I think) told me that because traffic engineers are no longer able to plan the motorways that they really wish to design through our cities, they have dedicated themselves to making those elements that they are still allowed to design into motorways.  Chief amongst these, it seems, are our cycle lanes.

The road to nowhere, from the east

Think of some of our most beloved and historic old market squares – Richmond in Yorkshire comes to mind.  Here the market square caters quite happily for pedestrians, cyclists, cars and busses, and all sorts of other activities, and apart from a pavement around the very edge, all is a continuous expanse of cobbles.  No need for green strips for cyclists, red strips for busses, and whatever else for other users.  Users exist happily side by side because the cobbles and numerous entrances and exists on to the space ensure that everything moves slowly enough to allow for everything else to pass safely by, including pedestrians.  The design would never be allowed today! 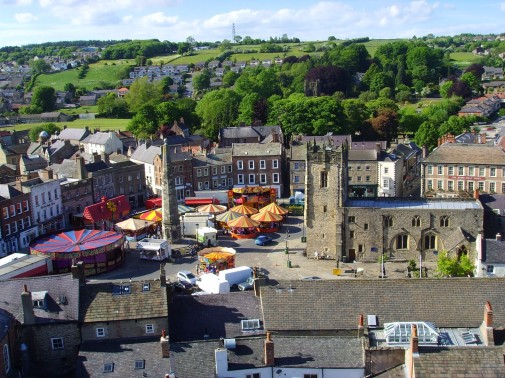 There seems to be a basic illogicality about the way our ubiquitous new strips of tarmac (green or otherwise) are designed.  Or perhaps, more correctly, there is too much logicality, because humans are not always as rational as our computer models tell us they should be.  Thus given half the chance we all take whichever route suits us best at the time – green, red, pink or blue!  In the best spaces, like Richmond’s market square, you can go anywhere.

Returning to my road to nowhere, a strange thing that I have noticed is that far from discouraging pedestrians to use it (big signs show it is for bicycles) the green tarmac actually seems to attract pedestrians like flies.  The reason, of course, is because it follows the quickest route through the new space.  There are also very rarely any bicycles on it.  Strangely, therefore, far from overcoming pedestrian/cycle conflict (if any existed in the first place, which it didn’t) it might actually encourage it.

Lets throw away the rulebook in the future and think in terms of a few simple principles to be interpreted in the light of local circumstances: